When I first volunteered to assist Prof. Bira in restoring the Nicholas Roerich House in Mongolia, where Nicholas had lived with wife Helena and eldest son George during 1926 and 1927, the challenges loomed large. But somehow things came together.

Eight months later, when we prepared for our July 6th 2009 opening, we faced a further challenge: what to hang in the museum for the opening ceremony. After all, we had no actual Roerich paintings. In fact only one Roerich original exists in Mongolia, and it hangs in the Zanabazar National Museum. All others created during Roerich’s 1925-1928 expedition through Mongolia and Tibet, including the many works he painted during his 1926-27 stay in Ulaanbaatar, were contracted to the Roerich Museum in NY, or at least the early version of that Museum that had emerged from Roerich’s 1920-1923 travels in America, and his highly successful work there. 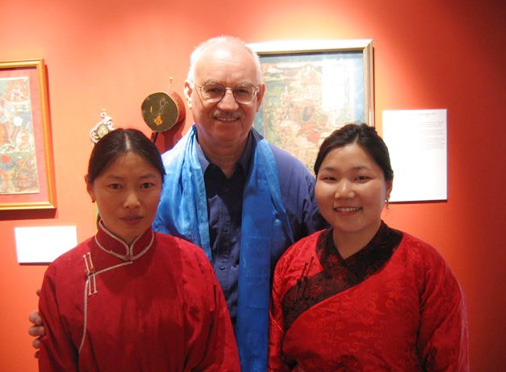 We decided to go with art prints and hand copies of Roerich works for our opening. Daniel Entin, director of the Roerich Museum in NY, graciously provided us with prints, as did two of the Russian associates. Jo Jagoda from Dallas, a wonderful supporter of our Roerich activities,

For the hand-created copies I turned to a female artist friend: Ms. Soyolma Davakhuu. I had met Soyolma, when I first visited Mongolia in 2004. Later, when I organized an exhibition of traditional Mongolian Buddhist art in 2006 in Oglethorpe University Museum, Atlanta, USA, in honor of the 800th commemoration of Mongolian statehood, Soyolma accepted the invitation of Oglethorpe to come and serve as Artist-in-Residence for a month. She was accompanied by her sister, an abbess of an Ulaanbaatar female monastery, who led meditation and chanting session in the university for the month. (For coverage of the Atlanta exhibit, see the YouTube video http://www.youtube.com/watch?v=WN5yLLRbr-U). Over the next four years I had the honor of arranging exhibitions for Soyolma in a half dozen US cities, including NY, Chicago, Bloomington (In.), Buffalo (NY) Atlanta, and Northampton (Ma), (for photos of these shows see the link http://picasaweb.google.com/soyolma108. 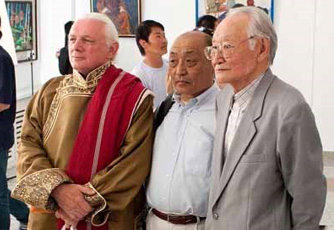 But let’s return to the story of the Roerich House opening of 2009. We needed art for the house on opening day. I approached Soyolma, and requested her to ask her artist friends around the city to each create a copy of their favorite Roerich painting. In addition, we asked her to help with a national competition we hoped to run: “Roerich and Me.” The idea of the competition was to have each artist first create a copy of their favorite Roerich work, and then create an “inspiration” from that work, meaning whatever they liked to do. More than fifty artists participated. The Khaan Bank Gallery in downtown Ulaanbaatar even hosted the works as an exhibition two weeks prior to our opening, in order to bring attention to our Roerich House event. 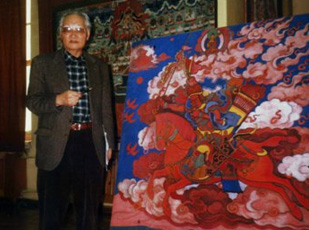 Soyolma personally created several wonderful Roerich copies for us, including a full-size one of the wonderful painting that Roerich had reluctantly gifted to the Mongolian government in 1927. This Roerich painting later became lost during the long period of the Stalinist purges, but was found, I believe in 1958, when Nicholas’s son George visited Ulaanbaatar in 1958. Many decades later Prof Bira convinced the Zanabazar  Museum to allow him to open the painting and study the inscription on the back. The inscription read, in Tibetan script, “Shambhala Gyalpo Rigden Drakpo,” meaning “The Shambhala King and Knowledge Holder Rudra.” As Kalachakra enthusiasts will know, Rudra is the name of the prophesied twenty-fifth king of the mythological land of Shambhala, who will one day save the world from a self-inflicted catastrophe and usher in a golden age that will last for a thousand years. 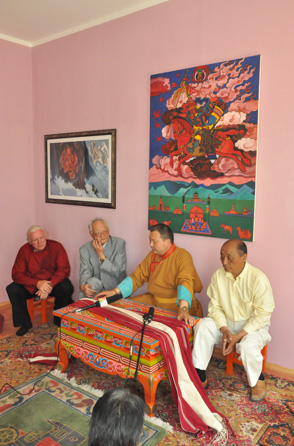 As stated above, Soyolma created several Roerich wonderful copies for our opening, including one of “The Red Hero.” Another was Roerich’s famous painting of the great 11th century Tibet yogi, mystic and poet Milarepa, who is widely popular with Mongols even today. She also had several of her friends create other pieces for us. As a result, the Roerich House was resplendently beautiful during the opening.

Hummm. The name of this blog entry is “A Roerich Mongolia Artist Heroine Shows in NY.” I better get back to the main story line.

A number of us thought that it might be appropriate to celebrate the 100th anniversary of Mongolia’s re-assertation of its status as an independent country by organizing an exhibition in the US of national award winner artists. The Manchu Mongol occupation of China, that had endured for over two and a half centuries, came to an end in 1911 (Manchu Mongolia had invaded and colonized China in 1644). Shortly after this dramatic turn of events, both Mongolia and Tibet issued declarations stating that whatever rights and arrangements that had been in place because of treaties in the Manchu Mongol / Khalka Mongol / Tibet alliance would not be extended to the Han Chinese, who had overthrown the Manchu Mongols.

I approached my old friend Ganden Thurman in Tibet House, NY, to see if the Tibet House Gallery would be interested in such an exhibit. Tibet House had originally been founded by Bob Thurman, a long time student of the great Mongolian lama Geshey Wangyal, who in turn had been a disciple of the Mongolian master Tsenzhab Dorje (known to modern Mongols as Agwang Dorjev). The first part of Tsenzhab Dorje‘s name, i.e. “Tsenshab,” is in fact a title, and indicates that he was one of the seven scriptural tutors of the Thirteenth Dalai Lama. It was this Dalai Lama who, in coordination with the Eighth Bogd Lama of Mongolia, had issued the 1911 proclamation “re-affirming” independence. Therefore Tibet House seemed an ideal venue for our exhibit. Ganden agreed, and enthusiastically accepted the proposal.

Then came Step Two. Here I asked my old friend Soyolma, who had won the 2008 “Artist of the Year Award” in Mongolia, to allow us to build an exhibit around her work, while incorporating four or five other national award winners. I also asked her to suggest other artists who fit this bill. 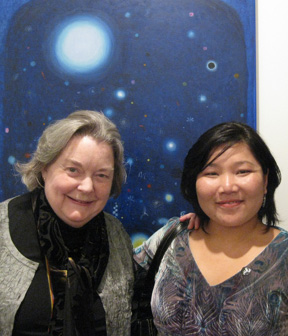 Step Three bumped things up a notch, and for it involved the delicate task of sorting through artists and art. For this I brought in an art professor friend, Prof Ann Norton of Rhode Island. We had worked together on several other exhibitions in the past, including an exhibition in Mongolia in the summer of 2010, entitled “Three Feminine Visions: A NY/UB Art Extravaganza.” (For a YouTube video on this show, which was co-sponsored by the Roerich House Mongolia, follow the link http://www.youtube.com/watch?v=IX9LIJ8gjIE.)

Ann planned to be in Ulaanbaatar for a Buddhist conference in July of 2011, so the timeframe worked perfectly. She readily agreed to take on the task, and we began to work together in cyberspace, sending images of paintings back and forth across the web in an effort to create the desired theme and mood. Eventually we came up with six artists and forty works of art that we felt represented the genius of the contemporary Mongolian artistic spirit.

Step Four involved funding. I applied to the William Hinman Foundation for a small grant, to cover costs of sending over a few of the artists with their art. The application was successful.

Then November rolled around, and we had to move into high gear. Soyolma and another of the artists, Bulgantuya, flew with the art to Atlanta, where Scott Engel of Designs Creations (http://www.framewise.com/testimonials) took on the task. Then Jose Morelli, a Peruvian American architect and graphic designer who lives in Atlanta, took artists and art on the 20 hour  drive to New York, where the art was installed. (By the way, Jose is also an accomplished musician. Hear him with his band, the Flying Mystics, on numerous YouTube links. One piece that he created for Roerich House Mongolia is called “Cloud Surfing.” In this work he puts Flying Mystics music to Nicholas Roerich’s “Altai-Himalaya” paintings. The link to it is http://www.youtube.com/watch?v=vIBAxeE4FhY

And so it went. December 1st was scheduled as the opening day. Naturally we made a YouTube video from the event. The link is http://www.youtube.com/watch?v=8lljLa7qvBY

Below is the profile of the artists and the exhibition, if you the reader are in the area. The show will be up until February 15th, 2012. Fifteen of the forty pieces have already sold, so contact Tibet House soon if you like one of the pieces. Tibet House has a wonderful link to the show on its site. http://tibethouse.us/art-gallery/current-exhibition

Below is a profile of the exhibit and the artists.